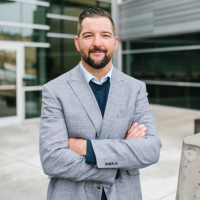 Interest rates are low!  Just how low depends on the rate in question.  For instance, longer-term rates like those for fixed-rate mortgages and 10yr US Treasuries are as low as they've been since November 2016.  Shorter-term rates are another story.  2yr Treasury yields are only back to mid-2017 levels and the all-important Fed Funds Rate has yet to move lower from its decade-long peak. 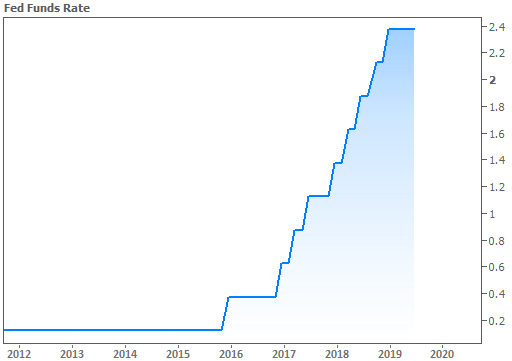 What's up with that?  Although the Fed Funds Rate and other interest rates generally move in the same direction in the long run, there are certainly times where longer-term rates break away.  The most obvious reason for this is that the Fed only has an opportunity to announce a rate change every 6 weeks, but that's not the only reason (clearly, longer-term rates have been moving lower for more than 6 weeks!).

The more important reason is that the financial market is expressing doubt about economic momentum.  In general, rates rise during an economic expansion--especially when inflation is healthy (low rates hate inflation!).  With that in mind, the current economic expansion is in record territory by some measures.  As such, investors are starting to look for signs of a shift.  They're seeing them in the form of weaker global economic data and the additional expected fallout from the trade war.  Persistently low inflation only adds to the case.

What are the implications?  This is the market's way of betting on--or at least positioning for--a transition.  If trade agreements are hammered out more quickly than expected and if the global market responds surprisingly well, the economic expansion certainly could encounter some sort of second wind.  At this point, however, bond traders will believe that when they see it.

There are past examples of similar positioning (where longer-term rates move below the Fed Funds Rate).  Each example falls 1-2 years ahead of a shift into lower gear for the economy.  The bigger and more obvious the crossover--as in '89, '00, and '07--the bigger the eventual shift.  The current crossover isn't that big yet, but some investors are worried it will be soon. 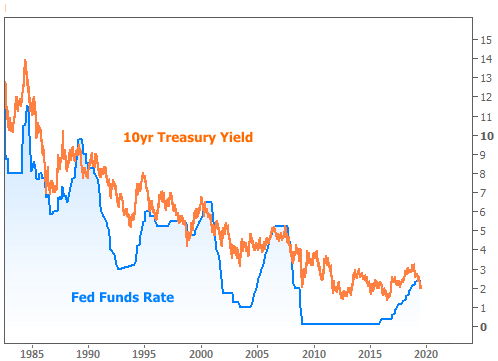 So is the Fed going to cut rates then?  The market is definitely banking on that, as can be seen in the chart of rate cut expectations below. 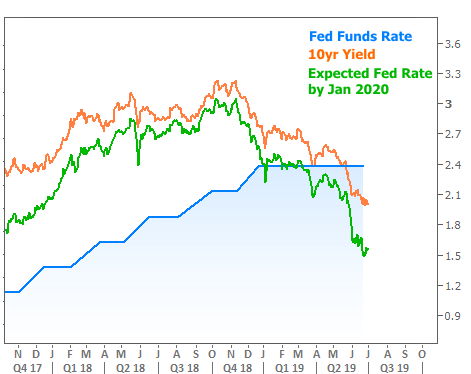 Why haven't they done it already?  More than a few investors thought the Fed might cut at the most recent meeting on June 19th.  Instead, the Fed did what the majority thought they would by indicating a willingness to cut if the economic outlook doesn't improve significantly.  They don't want to act too quickly or too slowly due to the uncertainty surrounding the rest of the current economic expansion (i.e. it could get that second wind mentioned above, and rate cuts might not be ideal in that scenario).

This makes next week's economic data EXCEPTIONALLY important.  The first week of any given month typically has the highest concentration of economic reports that can affect interest rates.  Depending on the calendar and holidays, we usually get both of the ISM Purchasing Managers Indices (PMIs) in addition to the big jobs report on Friday.  This will be the case next week as well, even though markets will close early on Wednesday and remain fully closed for Independence Day on Thursday.

There's always a chance that the data will "thread the needle" between strength and weakness in such a way that rates don't change much.  But in this case, there's an equal chance of a fairly big reaction, and it could go either way.  The following chart of 10yr Treasury yields from last week's newsletter is still very much in play. 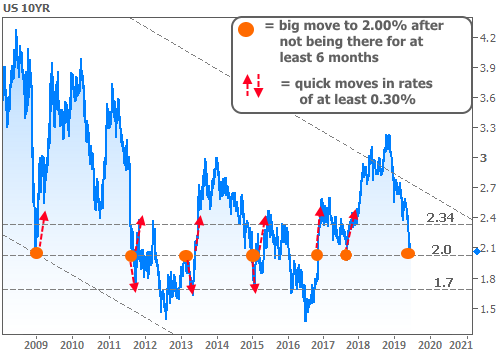 Enough speculation.  What happened this week?  Both stocks and bonds were increasingly interested in reacting to headlines about US/China trade relations as we head into this weekend's G20 summit.  That said, the volatility was well-contained inside recent ranges.  In fact, 10yr yields haven't moved outside the range seen on June 19th despite plenty of ups and downs in the meantime.

That means the housing/mortgage markets can continue to enjoy the "low rate effect."  This is already apparent in some of the housing-related data, but due to the time involved with the home purchase process, there's definitely a lag.  It's least noticeable in the weekly mortgage application from the Mortgage Bankers Association.  The effects on refi demand are obvious.  More subtly, low rates have helped purchase applications hold closer to springtime levels than they did in June 2018. 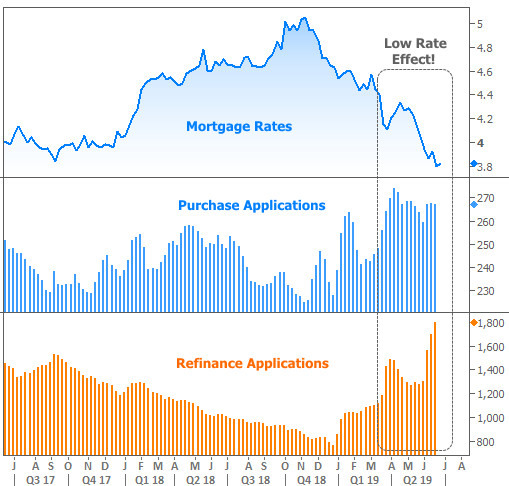 Pending Home Sales--the most timely MONTHLY home sales numbers--confirm the purchase market's willingness to respond to low rates.  This was already evident in the bounce earlier this year.  This week's data shows pending sales are continuing to enjoy the low rate effect. 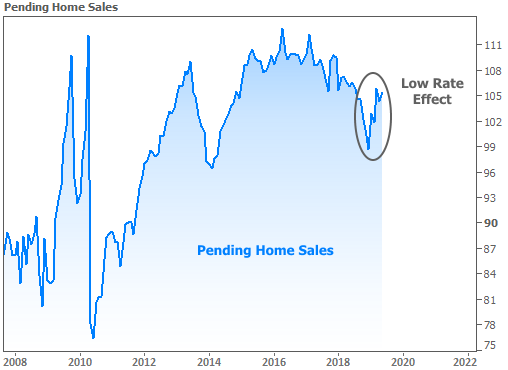 New Home Sales data for May was also released this week.  Not only do these numbers tend to have almost no connection to interest rates, but they're more prone to volatility and revisions than other data. As such, we shouldn't lose sleep over the decline from 673k (annual pace) to 626k.  Moreover, the new homes market has climbed more steadily and held its gains better than the existing homes market. 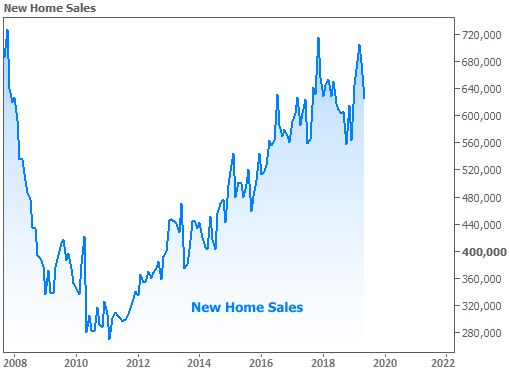 Finally, both of the major home price reports were out this week (Case Shiller and FHFA). Notably, these are for the month of April and they're based on closed purchase transactions.  That means the homes in question went under contract in February or March.  At that time, the big drop in rates was still fairly new.  Even so, FHFA prices ticked up for the first time since the middle of 2018.  Case Shiller prices effectively held steady, declining by only 0.1% year-over-year. 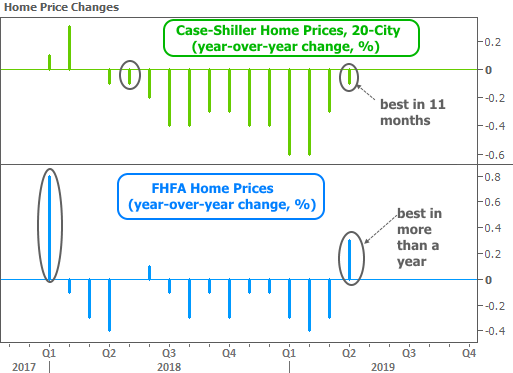 Both indices have been well into positive territory since 2012.  The low rate effect--or simply the absence of alarmingly high rates like those seen in late 2018--should help that trend to continue. 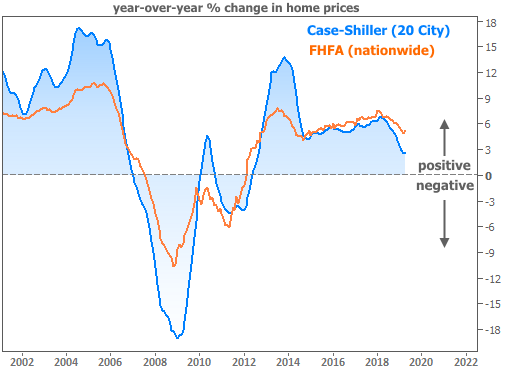