Rising rates have been on the menu for months, but the drama kicked into a higher gear this week.

Maybe you heard about this?  We've certainly been discussing it in recent newsletters (especially last week's).  The rising rate narrative hit the mainstream this week as it was widely credited for doing damage to the stock market. 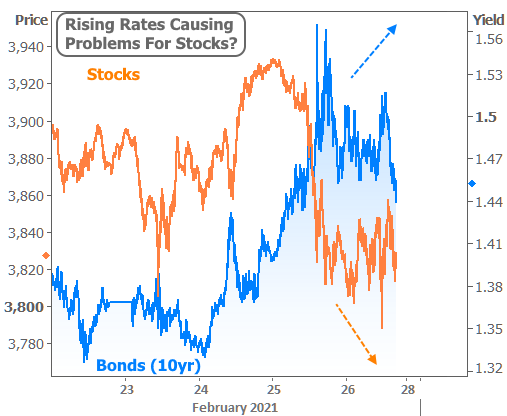 Perhaps you even caught one of Thursday's many mortgage rate headlines citing the spike in Freddie Mac's weekly mortgage rate survey.  Freddie reported a jump in 30yr fixed rates from 2.81 to 2.97, their biggest in nearly a year.

Unfortunately, Freddie was low last week and they're WAY low this week.  This is a common problem when things are this volatile.  Although their survey is published on Thursdays, most of the responses are in by Monday.  As such, their numbers didn't capture the brutal spikes that came later in the week.

How brutal can a spike really be if we're still talking about rates in the low 3's?  That's entirely a matter of perspective.  If you'd decided to float your rate back at 2.75%, figuring that rates only ever go lower, February hasn't been great for you. 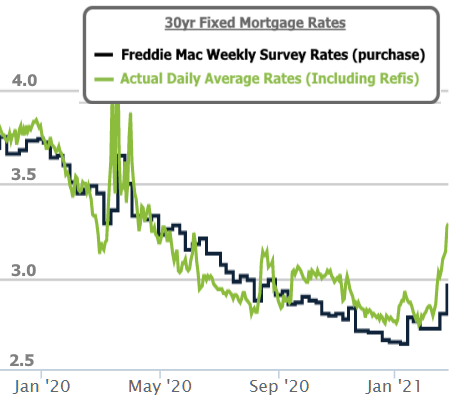 So why is all this happening?  And more importantly, is it going to KEEP happening?

First off, two separate things are happening.  On the one hand, we have the well-known, well-understood, and well-explained rising rate trend that's been intact for months.  If you're a regular reader of the newsletter, you might be tired of that one by now.  You can revisit one of any number of past newsletters for a refresher (here's a good one from late January).

In a nutshell, if covid caused a rapid surge to persistent all-time low rates, the improving outlook had the opposite effect--albeit a gradual one at first.

The other thing that's happening is a recent acceleration in the longstanding trend--first in 2021, but then to an even greater degree over the past 2 weeks. 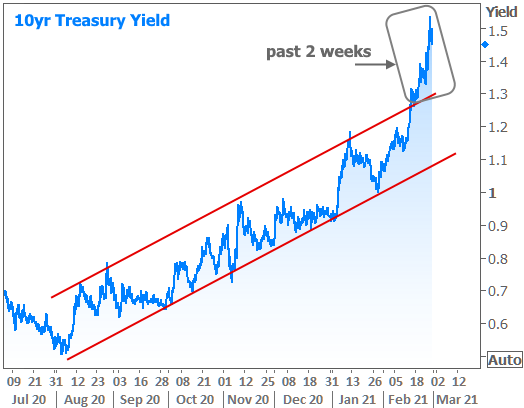 Plummeting case counts played a big, logical role here as well as the Georgia senate election and progress on fiscal stimulus.  Stimulus hurts rates by increasing the supply of Treasuries, and higher supply means higher rates, all other things being equal. 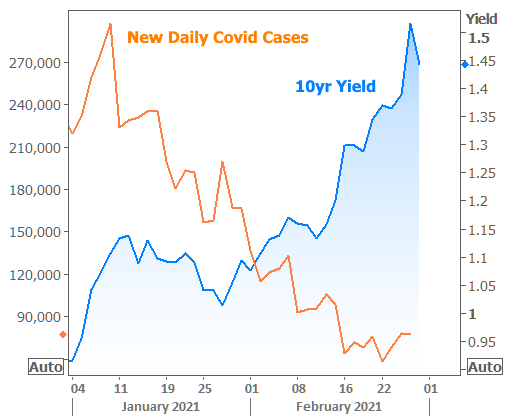 There was a fresh reminder about Treasury market supply at center stage for this week's rout.  The 7yr Treasury auction on Thursday was the worst of its kind since its debut in 2009 (a bad auction speaks to an absence of demand, which has a similar effect on rates as an abundance of supply).  Bonds hit their weakest levels of the week/month/year immediately after that, but thankfully appear to have stabilized since then. 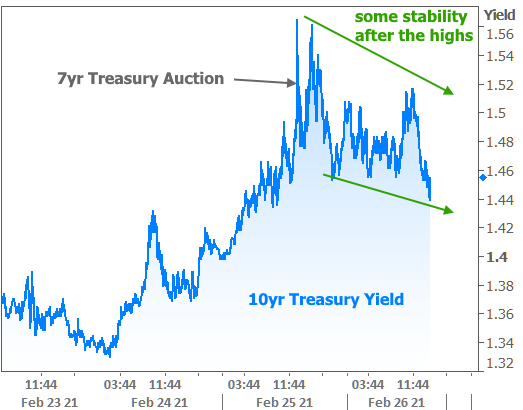 The Treasury auction definitely wasn't the only consideration this week.  After all, the volatility had already kicked into higher gear last week.  There aren't any satisfying specifics though.  It's a combo deal that all speaks to the improved outlook for covid and the post-covid economy.

There are also some highly technical trading motivations for bond investors that have to do with the changes in the rate landscape.  These can force money managers to make big adjustments to their holdings, and those adjustments often play out in these sorts of "snowball selling" episodes when traders have the same collective realizations.

As for the mortgage market specifically, everything is happening exactly as we said it would more than 2 months ago.  Mortgage rates have increasingly been forced to pay attention to broader bond market volatility.  This week was the best (worst) example yet.  The cushion is deflated, and the mortgage market is no longer invincible. 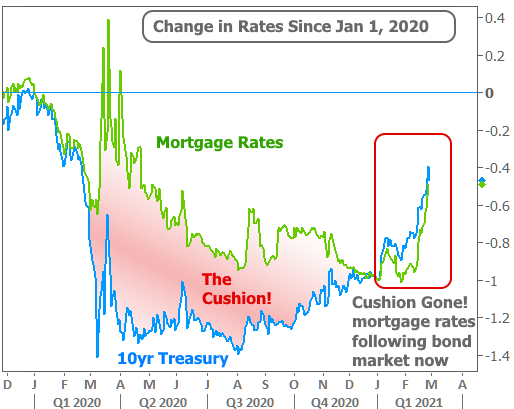 Reasons aside, the big question is whether the drama continues, or the bounce back is just the beginning of a deeper recovery.  While there's never any way to know for sure, what we CAN know is that our odds (of a recovery) improve as rates move higher.  In that sense, the brutality of the past 2 weeks is one of the best indications of potential support.  While that doesn't necessarily make a friendly bounce likely, it's more likely than it was after last week's big rate spike.

Optimism aside, keep in mind that this is a rising rate environment in general, and we don't currently have a reason to believe that trend is at risk of dying.  What we'd be hoping for here is a return to a more stable uptrend in rates.  That "return" could help rates move a bit lower in the short term before resuming their gradual uptrend.  Ultimately, it will be up to the course of the pandemic, the economy, fiscal spending, Fed policy, inflation, and other macroeconomic factors to determine the rate range through the end of the year.

Next week brings important updates as far as economic data is concerned.  There will be several reasonably important reports throughout the week culminating in Friday's all-important jobs report.